This flavorful dish is like a burst of autumn in your mouth. Each bite is full of flavor. The addition of raw apple kicks it up a notch. What a wonderful dish to share at holiday gatherings.

This main dish is delicious on its own but, if you prefer more protein, add a bit of pork, chicken or beef. I had leftover pork roast and added a few slices and thought it added even more to the dish. This has become a real favorite and one I’ll be making over and over again.

Lemon Bars in the Spring and Cranberry Lemon Bars for the holidays! With a bag of lemons and a large bag of cranberries on hand, I decided to make these delicious bars. I forgot to sprinkle with powdered sugar, but I was too anxious to taste them. They are tart with a burst of flavor from the cranberries. The bars were a real hit!

FOR THE CRANBERRY LAYER:

FOR THE LEMON LAYER:

Zucchini abound this time of year as do my Sungold cherry tomatoes. Combine these two ingredients with basil, garlic, shrimp…WOW! You could easily adapt this to regular pasta, but why? I topped my meal with a sprinkle of Parmesan as well. Deliciouso!

Fresh Peach Ice Cream is a summer dream come true. I’ve made it in the past but never cared for the icy chunks of peach in the ice cream. This recipe appealed to me with the blended peaches, allowing the peach flavor to permeate the ice cream. I added a bit of lemon juice (noted in the recipe below) to add a little citrus kick to the creamy goodness of peach ice cream. I served with fresh raspberries, my favorite combination with peach!

During the Pandemic lockdown, the girls and I joined our local winery, InVINtions, for their Zoom Italian Cooking classes with Chef Lucas.  We made many wonderful dishes with Chef Lucas, and Pears in Red Wine Sauce was a delicious surprise.  We didn’t have great expectations for this recipe, but trust me, it was one of many fantastic dishes!

When the holidays are upon us and we are tired of dishes that are too sweet or too rich, this is the perfect answer.  It is a beautiful dish to serve your guests or to enjoy all by yourself!

S’mores conjure up childhood memories of campfires with friends and family, biting into that creamy marshmallow with melted chocolate. Yum! Sometimes you don’t have a campfire and you still want s’mores. This recipe does that and takes it up a notch with peanut butter and chocolate hazelnut spread.

Make these delicious s’mores in advance and store in the fridge. Decorate for the occasion or holiday, in this case, Labor Day. It is a real crowd pleaser!

Next time, I would use a slightly bigger pan, since the batter cooked over the side.  However, a few crispy bites of dessert are equally good! 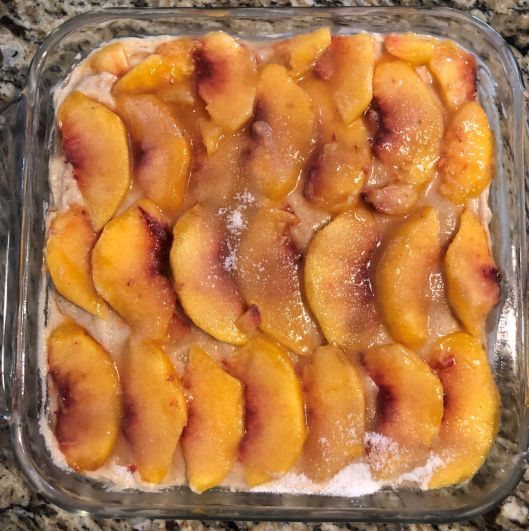 Crusty Bread that I don’t have to knead?  Just what I needed to go with the soup I was making.  Honestly, the recipe seemed too easy but it worked perfectly.  I baked the bread in my Lodge Dutch Oven and I baked it according to directions.  The crust was a little too brown, but the interior of the bread was perfect and tasted great!

It is wonderful served with soup and also wonderful as a sandwich.  As long as I plan a day ahead, I can make this bread any time! 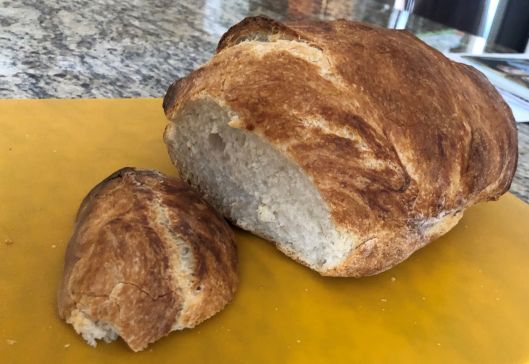 Hungarian Goulash is different from the Midwest Goulash I grew up with.  The Midwest version was always elbow macaroni, hamburger, tomatoes and sometimes, cheese. I experienced the traditional version in a Hungarian restaurant in Denver and again in Eastern Europe.  Goulash (Gulyasleves) is one of the national dishes of Hungary.  It reminds me of our traditional Beef Stew, although not as thick as stew and uses different spices. 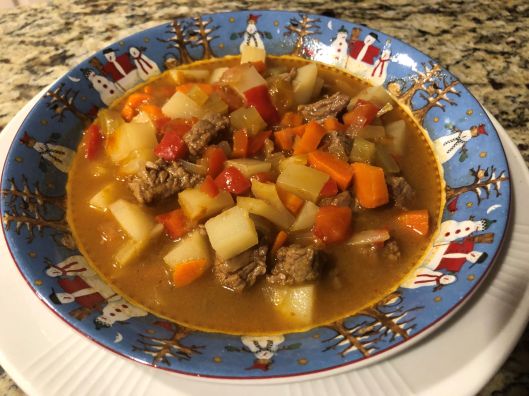 This recipe is an adapted version of the recipe from a tour guide, Food Tour Budapest.  We had a marvelous tour of wonderful restaurants, meandering the streets of Budapest experiencing traditional food and drink in historic and unique restaurants.  How I wish I could travel again and experience such a tour.  Some day… In the meantime, I can recreate the food memories in my own kitchen.