French Macarons are such a light, sweet delicacy.  I never would think of making them, yet, one day, my oldest daughter, Megan, called to say she’d had a dream about making Macarons and was going to bake them that very day.  Megan is the dessert maker in our family, always coming up with something new and delightful. Even so, I thought they would be extremely difficult, especially at Denver altitude.

Never fear!  The results were stunning and delectable.  The only change Megan made to the recipe was reducing the vanilla and adding almond extract to both the cookie and to the frosting. I’ll leave the Macaron making to Megan and praise (and enjoy) the results!

For the French Buttercream Filling:

Our Book Club meets every other month and tries to match the pot-luck cuisine to align with the story.  This month our book was ‘Sarah’s Key’. I loved this book!  If you’ve not read it, I highly recommend it.  The story takes place in France during WWII.  While food and cooking wasn’t the topic of the book, French Cuisine was the food du jour.

French cooking brings Julia Child to mind but I was looking for something light and fresh.  I was delighted to find a French Green Bean Salad that was perfect!

French Onion Soup was introduced to me in my 20s at a restaurant on the Plaza in Kansas City, MO.  It was highly recommended and I have been in love with it ever since.  Thank goodness food processors were invented to help with the teary slicing duty to make this dish. 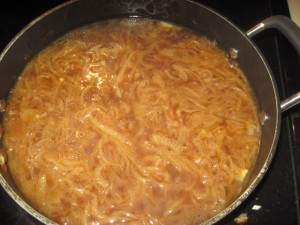 This recipe is so simple yet so yummy.  I have also added left over roast beef bits if I have them on hand.  Take it for a spin and see if it is a hit at your house!