Everyone in my life knows I’m a little nuts about nuts.  Last week I purchased a box of cocoa roasted almonds at my local King Soopers and loved them!  The bit of sweetness along with the nut crunch and cocoa blast was divine.

I searched the web and discovered a low-cal recipe: www.ehow.com/how_5850786_make-cocoa-roasted-almond-recipe.html

They were easy to make and store well.  I had dry ingredients left over, so I tried the recipe with English Walnuts.  They were equally wonderful!  Cocoa roasted almonds and walnuts are my new, favorite afternoon snack!

Each almond has about 7 calories.

My love of eggplant began when I was a young child.  My mother would peel and slice the eggplant, sprinkle with salt, and let rest on paper towels for 30-45 minutes to remove the bitterness.  She would then flour, salt and pepper the eggplant, and brown the eggplant slices in hot oil.  The hot eggplant slices were then put on a slice of bread and eaten as a sandwich.  I STILL love eggplant this way but have searched for healthier ways to cook eggplant.

This spread is a new favorite.  Rumor has it that the original recipe came from the Barefoot Contessa.

It is difficult for me to resist eating the cubed eggplant straight from the roasting pan but the majority usually makes it to the food processor.  I often eat this as a side dish as well as a spread. Either way…you can’t beat the wonderful flavor of eggplant.  YUM! 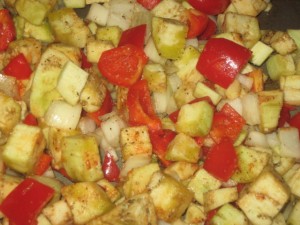 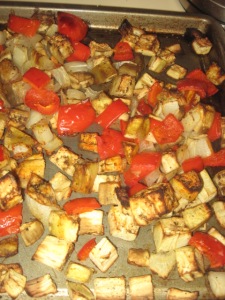